This digital presentation functions as a depository for notes and developing content related to an exploratory autoethnography project, in which the researcher (that would be me), delves into the researcher’s (me, again) experience of a state of circumstance and reality that was clinically diagnosed as being ‘psychotic,’ examining and reflecting on that state in the context of larger cultural norms, ideas, and realities.

This work will draw from the researcher’s personal writing and correspondence, which has been collected and archived over the past 5 years. New text-based and multimedia narrative content will be generated to support cohesion within and between project elements.

Consideration of the researcher’s experience of working with autoethnographic practices will be included in the project’s methodology.

I’m sitting here in the dark, outside, not-quite cold in January, here by the Pacific. The big white-lit hotel name shines through the trees, the silhouettes of branches like veins across the ‎letters, which are flat black during the day, somehow bright, glowing white at night.

A few minutes ago, I finished typing up another revision of my project proposal. The scope just shrinks and shrinks. People seem pleased by this. They tell me that it is a good thing to do, to “narrow my focus.”

“It’s just a masters,” they explain, “you don’t need to be exhaustive.”

I understand this, and know that they are right, that an overly complex project could easily swallow me up.

“I’m can be a little ambitious.” I leaned over and poured myself more lemonade into a tiny plastic cup, swallowed it in one silent gulp.

I talked with a man about my project. I probably said ‘autoethnography’ about 15 times.

It was wonderful, to be able to speak excitedly and clearly, the word rolling off of my tongue like it had been born there, the melding of all the words that sound out its syllables and name its meaning.

As I write this, I am tense with the sound of the planes taking off. I remind myself that I need to go upstairs, that I can’t just sit here in the dark, 1/2 shivering and typing into my phone. ‎I am thinking about my porch, at home. The dogs bustling around, the children upstairs, the press of ideas and voice, voice, voice, all quiet in my mind, snaking out in shivers and – in the summer – sweat, as I push the words onto this screen, almost imperceptible little clicks, buttons being pressed.

My back is hunched and the planes just won’t stop taking off. I’m going to have to get out of here soon. It sounds like a wartime I have never known, ‎the air itself shuddering, recoiling and reverberating, the planes themselves screaming into the sky. It’s really terrible, this airport noise.

I was about to say, before the planes distracted me, that lately when I write about autoethnography, I feel a great surge of something almost like love – a pure exaltation, a great hope, as if my voice had found a home, a place where it could speak.

This afternoon, standing and talking with the professor who would surprise me by offering to supervise my project, I was caught off guard as I spoke about the sensation of having been so overtaken with joy and relief – gratitude!- that this practice they call autoethnography exists. I was about to tell him that tears had come to my eyes, when my eyes filled again, my chest flooded with that same sense of awe, a pearline feeling that I may have found a place for my voice, a way to tell the stories I want to tell, the stories I need to tell.

I just sent out the message that contains a link to my proposal. I changed it, again. Pulled in the scope.

I decided to, for the time being, put that free-write from January 28th here, at the beginning. It will be helpful to me to remember the feeling of autoethnography being new and full of possibility.

For the past two weeks, I have been poring over texts relating to the body of methodologies and practices that autoethnography encompasses. Sitting in front of the fire – the pellet stove, our only source of heat in this house that over a century old, full of ghosts and drafts, bad seams between the inside and the outside – I squinted into my phone, my chest compressed as I pounded out a disjointed stream of words about what I will and will not include in this project. I agonized over the impossibility of only telling my own story, grew anxious about the ethics of omission and inclusion, acknowledgement and secrets.

I tried to write an outline, and ended up drawing a picture of a baby with a cacti growing out of its head. I made a collage of pages from old textbooks, painted over the images of brains and lightwaves with white acrylic, a damp paper towel, smearing the paint. I drew an image of a woman in a cardigan holding an egg. I painted over her face, and the next night I surrounded her with alligators, with black bars rising up over the space where the egg was. The bars stretched up toward where the woman’s face was, they end in jagged lines. They look like trees that have been burnt.

I still don’t have a proper outline. 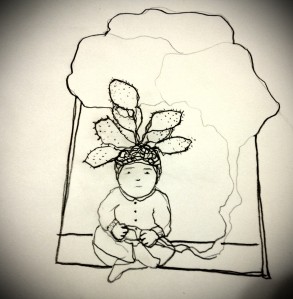 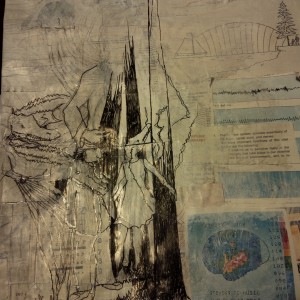